[8] And prevailed not;
neither was their place found any more in heaven.

[9] And the great dragon was cast out,
that old serpent, called the Devil, and Satan,
which deceiveth the whole world:
he was cast out into the earth,
and his angels were cast out with him.


Satan and his angels are coming soon!
Prepare yourselves spiritually and with intelligence,
using wisdom,
tell the children of this final generation about the locust army!

Yes, Satan and his angels
comprise the final stage of that locust army
and there will soon be a swarming and spiritual devastation such as this earth has never seen,
nor ever will again,
"a time of trouble such as never was since there was a nation" (Dan. 12:1)!

Perhaps the hardest part for most people to see and understand
is that the desolation by Satan and his locust army is a spiritual destruction
which causes the "spiritual death" of the soul,
not the physical death of the flesh body. 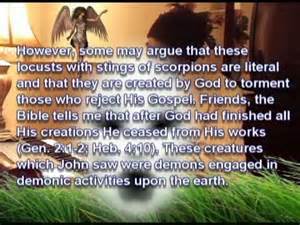 You've heard the the phrase "A Wolf in Sheep's Clothing" How About "A FALSE SUPERNATURAL ARCH-ANGEL PREACHER/PRIEST WARING A FAKE BREASTPLATE"
Live Link to- Satan and his locust army
That's right,  the great tribulation of the false-christ is actually a time of peace and prosperity which Daniel documents in Dan. 11:24.

The idea that the great tribulation of Satan is a time of physical pain and affliction, is without foundation.

The great famine of the end times is not physical, i.e. for bread,
but "for the hearing of the Word of God (Amos 8:11)".

You see,
the spiritual destruction of your soul is far more devastating
and serious than any band of actual locusts, i.e.
the insects themselves, could do to your flesh body!

Surely you can understand that?

That is why Christ said do not even be concerned
about those who can kill your flesh body for all flesh is temporary anyway!

You be concerned about your soul!

Matthew 10:28
And fear not them which kill the body,
but are not able to kill the soul:
but rather fear him which is able to destroy both soul and body in hell.
The great battle and tribulation in these last days
is a spiritual battle for the souls of men,
to see who it is that you will worship, who you will wed as your husband.

Will you be the first woman taken in the field by the spurious,
magnificent, miracle performing, good looking, charismatic supernatural archangel (Apollyon/Satan)
who comes claiming to be Jesus at the sound of the 6th Trump,

or will you wait (endure unto to the end)
until Jesus Christ Himself returns at the sound of 7th Trump?

Live Link to- The Seventh Trump

Live Link to-   Will YOU Endure til the end


In other words,
will you be a spiritually chaste virgin and "barren" when Christ returns,
or will you be found to be nursing a child having been spiritually "swept off your feet"
and impregnated with the rapturous deception of the first Jesus (Satan, the false-christ)
who so easily "took you to wife"?

Editors note: We're also talking to men here, not just women! This is about you, male or female, spiritually giving suck to Satan's child, i.e. falling for his lies.
Luke 23:29
For, behold, the days are coming,
in the which they shall say,
Blessed are the barren,
and the wombs that never bare,
and the paps which never gave suck.

Luke 21:23
But woe unto them that are with child,
and to them that give suck, in those days!
for there shall be great distress in the land,
and wrath upon this people.

Jesus Christ won't be very happy with those men and/or women who have left their first love (Him) and jumped in bed with Satan,the false-christ!

Would you be happy if you went away
and returned to find your bride to be nursing a baby!
You'd probably say something like,
"Why you whore! Get away from me, I never knew you!"

Again, the problem is as explained in the Book of Joel.
The corn and the wine and the oil have been withholden
from the houses of God
and our people are spiritually drunken with prosperity and the multitude of distractions in their lives.

They stand spiritually naked without any armor of protection
and most are completely unawares of the impending spiritual onslaught
by the locust army
and they shall surely find themselves snared by Apollyon and his band of merry men,
unless they soon wake up.


Luke 21:34
And take heed to yourselves,
lest at any time your hearts be overcharged with surfeiting,
and drunkenness, and cares of this life,
and so that day come upon you unawares.

[35] For as a snare shall it come on all them that dwell on the face of the whole earth.
So how can we help our brothers and sisters?

The instructions are "Blow ye the Trumpet in Zion",
yes, the 5th Trump about the coming locust army,
and sound the alarm in true Israel! 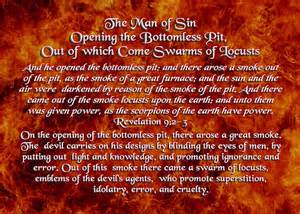 What is the bottomless pit?  A pit is a something with which everyone is familiar, a hole in ground for instance, that you can look down into. (Keep in mind, however, that there are some who can't tell the difference between their donkey and a hole in the ground. Fortunately, our Father uses many different analogies so that perhaps one will "ring a bell" up there.) However, when you look into the pit described here there is no end in sight, for it is so deep it has no bottom, hence the term "bottomless". This Picture in your mind is to graphically illustrate the depth of the state of degradation to which the one who is in the pit has fallen, i.e. Satan. He has fallen to a depth so far down and isbecome so infinitely low that you cannot get any lower.

Now, let's see what happens when the bottomless pit is opened. 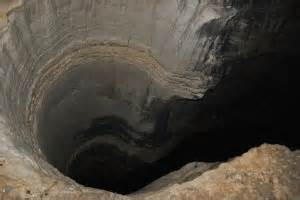 [2] And he opened the bottomless pit; and there arose a smoke out of the pit, as the smoke of a great furnace; and the sun and the air were darkened by reason of the smoke of the pit. 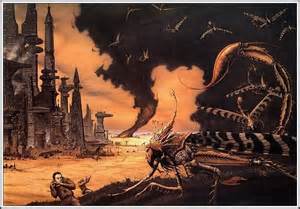 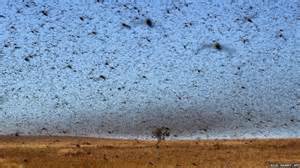 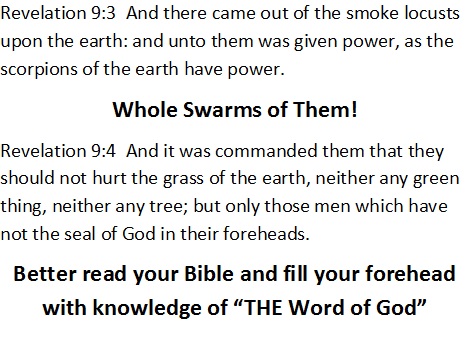 The first thing out of the pit is so great a cloud of smoke (read deception) that you can't see any truth anywhere.  Everything is dark. And what is causing this humongous smoke screen of deception? 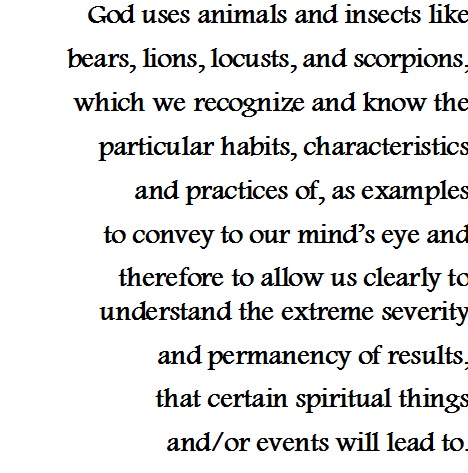 [3] And there came out of the smoke locusts upon the earth: and unto them was given power, as the scorpions of the earth have power. 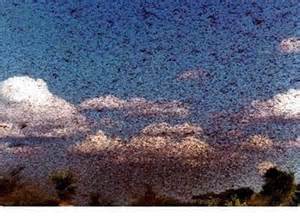 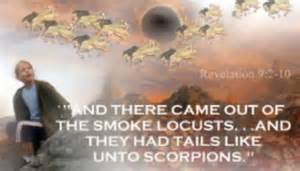 And arising in the smoke are Satan's fallen angels/locusts and scorpions from the days of Noah.
And their tails/ the descendants of Cain, Satan's son from his sexual encounter with Eve in the "Garden of Eden" (Christ called them, snakes and vipers). 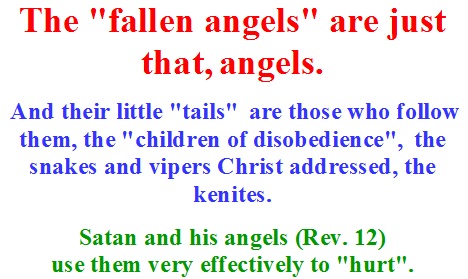 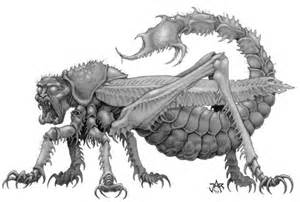 No, now you're off track again! Back to paragraph one of this lesson. "This entire description is the "Picture" that our Father would have us see in our "minds eye" representing the terrible devastation wrought upon the minds and souls of men and women by the "children of disobedience". Understand, you can't "see" a lie. And you can't see it devour someone's chance to see the truth. 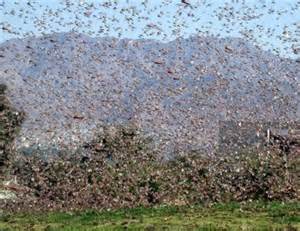 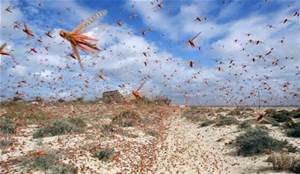 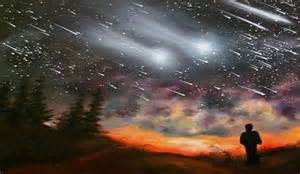 So we are talking about the enemies of God and "Seeing" an analogous "Picture" of them. They are like a bunch of insects, i.e. locusts, scorpions, etc. Are they to be feared?

NAW! Jesus Christ has given His own His Two-edged Sword, remember? And along with it, the POWER of it, i.e. the power to wield it! Here's what He has to say about creepy, crawly snakes and insects, i.e. low life creatures, Satan's own.

Luke 10:19
Behold, I give unto you power to tread on serpents and scorpions, and over all the power of the enemy: and nothing shall by any means hurt you. 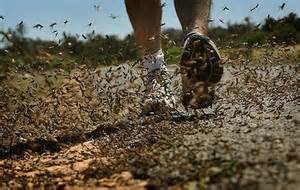 Squish! They're gone! Bye!
Actually, you can see you can just tread on these venomous insects with the gospel armour boots and save the Sword for the fire breathing dragon, to cut off his head! "I just can't wait for the opportunity", I say, as I polish my gospel armour. "Let that old dragon out the pit!" 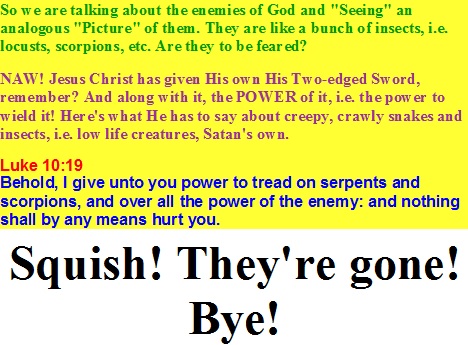 But, you must have your Armor Boots on!

Live Link to-  The Fifth Trump

Blow the Bugle and play "Reveille" for them to Wake them Up before it is too late and they are caught in Satan's trap into believing he is Jesus. Many, many will be snared by this imposter for it is written it will be a GREAT APOSTASY (2 Thes. 2)!

Note: Read the type and forerunner in Joshua chapter six how the "7" priests went before the LORD
and blew the trumpets before walls of that society came tumbling down with a "shout"! Joshua 6:8

"And it came to pass, when Joshua had spoken unto the people,
that the seven priests bearing the seven trumpets of rams' horns passed on before the LORD,
and blew with the trumpets:
and the ark of the covenant of the LORD followed them."

So if you have "girded yourself" with
the Gospel Armor,
"His Word",
and have been chosen by Joshua, i.e. "Yeshua"
("ye are a chosen generation, a royal priesthood,
1 Peter 2:9),
then it is your duty and obligation and command from your Father to help warn others of the soon coming abominable desolator and the spiritual slaughter that is about to take place!

It is the "sons and daughters" spoken of by Joel the prophet
who are to trumpet that Satan and his angels are coming first,
before Jesus Christ returns.

Live Link to- Joel the Prophet

This they do while the sound of the 6th Trump is being delayed,
shortening Satan's time to reign!

Satan's appearance will be as Jesus Christ
and his angels as "angels of light",
but their action will be as the swarming locusts
consuming everything that is green (living) in their path,
with the exception of those who have
the Seal of God in their foreheads (minds).